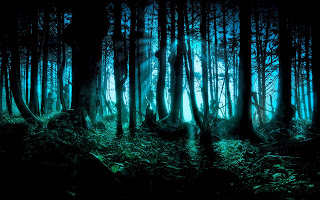 When I was in my early twenties, I was stationed at Loring Air Force Base, which sat at the very northern tip of Maine.  A place thick with forest, animal life and lots of lakes.  The base had been around since World War II and was the home of many top secret experiments.  On the back of the base, buried on the forgotten dirt roads, were many old buildings and former bomb shelters.

Most of these places were off limits, but I was a very curious person.

One early fall day, when it was close to sunset, I parked my car and started hiking through the dark woods in hopes of finding one of these buildings.  After all, I had heard so much about them, as legends and urban rumors were always present.  After about an hour of trekking through the forest, I came upon a cluster of ruins that were sure to date back to the Big War.  What excited me the most was a series of thick, steel doors that led to underground passages.

The thick forest blocked the fleeting sunlight.  With my flashlight pointing the way, I found a door that was slightly ajar.  It took all my might to pull it open, and that was just wide enough for me to squeeze through.  Then I stepped into total darkness, not knowing what to expect.

I am usually a very calm and relaxed person, but something in there made the hair on the back of my neck stand on end.  I felt a strange and unseen force.  Yet I wanted an adventure and pressed on. 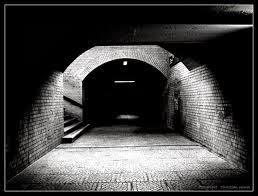 The tunnel was littered with supplies from long ago.  There were desks, chairs outdated office equipment and tons of old papers scattered all over.  It was as if one day there was an emergency and they vacated the place.

As I explored, the presence of something else being down there grew.  Suddenly the temperature seemed to drop with each step I took farther in.  Continuously I looked over my shoulder for someone else.

“Is someone there?” I called out, my voice bouncing off the concrete walls.

I got the feeling that whatever it was, it was by the way that I came in.  My heart started beating faster as I made my way past the discarded supplies.  The air became heavier, my hearing more alert.  The only light was my flashlight and the darkness seemed to be swallowing it up.  The fact that my breaths could be seen in the frosty air and I was sweating should have been a major clue.

A cold breeze pushed past me and I swore it said my name.  It was then that I really thought I made a stupid mistake.  Even worse, the voice came from where I had entered the complex.  Not wanting to go back, I moved forward at a quicker pace.

The tunnel split in several directions, but I stayed on the main path, not wanting to get lost.  I had no idea how big the place really was.  The faint whisper came again, this time a little louder.  Without warning, something in the darkness fell, making me jump.

With quick steps I rushed down the tunnel, trying to create distance in between me and whatever it was.  Suddenly the passage came to a halt and there was another safe-like door.  I clearly remember my hands trembling as I pulled the heavy door open, its hinges creaking loudly.

It opened to a large room, it was the commissary that I mention in Blood Tithe.  I went into the new room and saw rusty, metal post office boxes.  The most amazing thing was the names of the people that used to work there were still attached to the mail slots.
Unexpectedly the main door creaked open.  My heart rammed against my ribs as my trembling hand shone the flashlight in that direction.

“Dude, not in my eyes,” my friend Brad said.

It was him that had followed me into the tunnel.  Though I still swear that something else was down there.  Nonetheless, I used the underground shelter in Blood Tithe and the scary stuff in The Soul Collector.

Thanks for reading, Glenn J Soucy 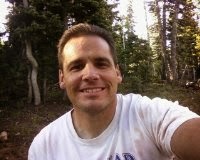 Glenn Soucy was born on July 3rd 1967. He moved a lot as a child and hardly stayed in a house longer than two years. Mostly grew up in Massachusetts and Arizona in the Phoenix area. Glenn graduated high school in Las Vegas and joined the Air Force shortly after. He spent three years in Germany and was there for the first Gulf War and the fall of the Berlin Wall. Glenn has been writing steadily since age nineteen. He loves to read and write, fast moving books that are "roller coaster" rides.

Check out all Glenn's books at his Amazon Author Page.

Today's giveaway is ONE PRINT COPY of BLACK ADAGIO by moi! To win go to HALLOWEENPALOOZA'S Official Event Page and comment in today's October 16th post announcing Glenn's blog and this giveaway that "I WANT TO WIN"! If you're the first to do so, guess what, you do win! 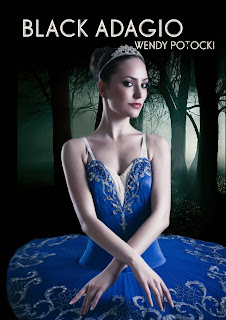 Melissa Solange is presented the chance of a lifetime. Chosen as a member of a new dance company, she works tirelessly perfecting the one element of ballet she's never mastered--the adagio. As she rehearses, a dark force watches. Resurrected by the surprise addition of a classic ballet to the repertoire, the sinister work is thought to be cursed--destroying anyone who attempts to dance it. When the production's lead dancers begin to disappear, the old warning is taken more seriously. A death worshipping cult called The Innocents is blamed, but she is not so sure. They may be the scapegoat for an ultimate evil living in the woods of Holybrook. Desperate for an answer, she searches for what lurks in the shadows of the old trees before she becomes the next victim of the Danse Macabre. 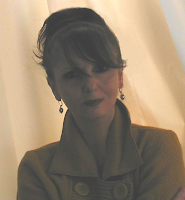 Wendy Potocki lives and writes in NYC. If that isn't scary enough, she writes in the genre of horror. She feels creating good horror is an art form. She religiously devotes herself to pursuing it over hill and dale -- and in the crevices of her keyboard.

Named one of the Top Ten "New" Horror Authors by Horror Novel Reviews, she has six self-published novels. Book trailers for many of her works may be found on her official website wendypotocki.com/. Her next planned projects are Thrill, The Witch's Stone, The Virgin, and ZaSo, a Gothic tale of horror. Please subscribe to her mailing list for updates and giveaway information.

In her spare time, she loves to go for long walks, drink Starbucks Apple Chai Lattes, make devotional offerings to her cat named Persephone, and be stilled by the grace, beauty and magic of ballet.